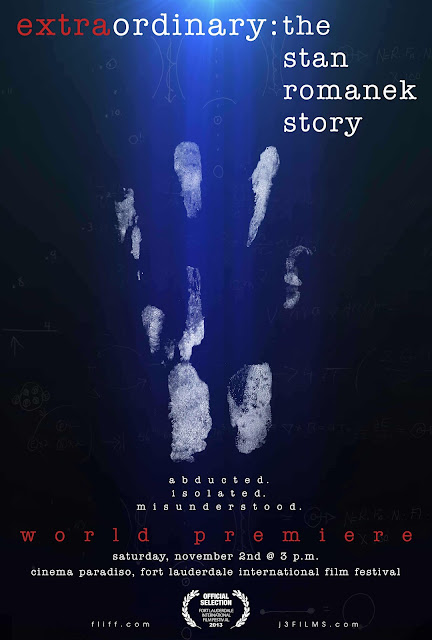 Orlando, Fla. – The j3FILMS documentary — extraordinary: the Stan Romanek story — has been named an official selection of the 2013 Ft. Lauderdale International Film Festival (FLIFF). The premiere is set for Saturday, Nov. 2 at 3 p.m. at the Festival’s showcase theatre – Cinema Paradiso – located in downtown Ft. Lauderdale.

Stan Romanek claims to be at the center of world’s most documented extraterrestrial contact story, and the multitude of evidence accumulated over the past decade has convinced thousands around the world his story is true. This documentary film takes audiences on a journey through Stan’s past, present and future with one goal in mind: Help the world understand that no one knowingly chooses the challenges Stan and his family have endured over the past decade.

“This project has taken us on a fascinating journey, and we’ve all learned a great deal in the process of making this film,” says Jack Roth, one of the documentary’s producers. “We set out to document a controversial and emotional story, and our goal has always been to create a compelling and objective narrative about one man’s evolution through a life he didn’t choose.”

The film’s director, Jon Sumple, sees this as a story of survival in the face of adversity, rather than just another film recounting eyewitness UFO experiences. “Simply put, the film illustrates how an ordinary man and his family have been transformed by extraordinary experiences,” he explains. “Some viewers may not believe in life beyond planet Earth when they leave the theatre, but they will surely believe Stan does. The film's intention is not to prove the existence of UFOs and extraterrestrials, but it does pose the question: What if this is all true?”

About j3FILMS: j3FILMS is a production company with deep ties to the communities surrounding the unexplained. Having worked extensively with researchers, investigative journalists and eyewitnesses, the principals of j3FILMS are dedicated to presenting material that encourages audiences to ask questions and challenge conventional wisdom. Driven by the fascinating lure of unsolved mysteries, j3FILMS has two objectives: entertain and educate. By tapping into the innate human desire to explore the unknown, j3FILMS takes audiences on an emotional journey of discovery.

About FLIFF: Now in its 28th year, the Fort Lauderdale International Film Festival is held annually from late October – mid November and reels out over 200 films from around the globe. During the festival, films are divided into the following sidebars: Competition Films, World Films, American Independents, Documentaries, Shorts, Sunshine Celluloid, Children’s Films, Gay and Lesbian Films, and Retrospective and Tribute Films. Filmmakers and celebrities attend many of the screenings and events during the festival, where parties and gatherings at area “hot spots”, on board yachts, and on the beach will provide audiences an opportunity to hob knob with film talent and other movie buffs.